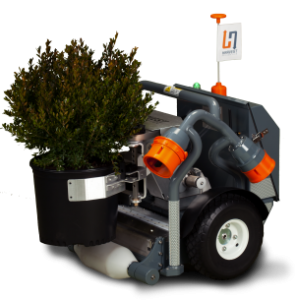 This cute little chap is Harvey, a robotic shifter of pot plants.  Pot plants need to be moved around a lot within nurseries as they grow, for instance to allow the right spacing between them.  It is tedious, time-consuming work, but Harvey doesn’t mind.  Using sophisticated on-board sensors and simple programming, he can reliably shuffle his charges from here to there and back again.  And again…  And with a price tag of $30,000, the manufacturers are confident he will be cost-effective for many growers.

The management of pot plants is not the most obvious application of the emerging robotics industry to agriculture, nor will it be the biggest.  Weeding is a massive problem for most horticulture, and it won’t be many years before we see troops of specialised robotic vehicles patrolling fields, interrogating each plant to determine whether it is a crop or a weed.  “Are you a cabbage?  You don’t look like a cabbage.  And you’re growing 10cm due south of where my database tells me the cabbage seed was planted.  Pardon me, but I’m going to have to zap you.”

Some farmers in the US are already buying automated low-flying drones to sow and fertilise their fields rather than buying the next tractor.

Robots in factories, homes and farms will be one of the canaries in the coal mine – one of the signals that alerts a wider public to the fact that artificial general intelligence is on the way.  Initially it will be easy to dismiss the robots as dumb brutes, but as each year’s model becomes smarter than the last, more and more people will ask themselves where it all ends.  The immediate worry is, what work will be left for humans to do when robots can do almost everything we can?  But the bigger worry is what we will do when they can do everything that we can – and better?